Group Policy has been with us for well over 12 years now and has turned out to be a good tool for deploying configurations to your users, servers and clients. A summary of Group Policy in general is beyond what I want to say here so for anyone looking for that before reading on have a look here.

A major tenet of Group Policy and Active Directory site, domain and OU design is to group users by common denominators and configure Group Policy for them. For instance you might want to use a geographical approach and group your users according to geograpihal location. All users from Europe in one OU and all from Asia in another. Each would get a GPO setting the common configuration that all users in any give location should have. Another approach would be to group by function. Lets say we place all users beloning to our R&D deparment in one OU, regardles of physical location.

While investigating some EFS settings I needed to look at the raw data in Group Policy settings files, usually called Registry.pol and located in the SYSVOL share for each GPO. First I tried to load it as any other hive in Registry Editor, but that did not work, indicating that .pol files do not use the same format as the Registry does.

After a bit of searching I found this excellent utility at the gpoguy.com website: Registry.pol Viewer Utility.

With it I could read (but not change) the information in my Registry.pol file.

The Registry.pol format is documented at MSDN.

WMI filters are useful to further filter Group Policy Objects (GPOs), beyond what is possible/convenient with groups.

Distinguish between x86 and x64 computers:

Use this filter to determine the Windows version and role:

NOTE: The PCSystemType property in only available on Windows Vista and later OSs.

SELECT * FROM Win32_ComputerSystem WHERE PCSystemType = 1

These are the possible values for PCSystemType:

In smaller deployments Microsoft Security Essentials (MSE) is a good, free alternative for anti-malware. If you decide to use MSE in your images, you will discover that sysprep resets the Out Of Box Experience (OOBE) settings for MSE. In other words; every user that logs on to a machine deployed from your image will see the MSE OOBE Wizard (Figure 1-2), until someone with Administrator privileges completes the wizard. Sometimes you might not want to expose your users to that. Fortunately for us, we can use Group Policy Preferences to bypass the OOBE wizard. 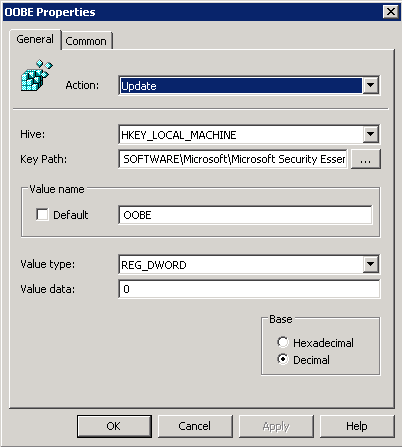 Having shown you how to do this I would like to call attention to the following excerpt from the Microsoft Security Essentials EULA:

A long time ago I created an HTML based application to calculate the numeric values required to hide specific combinations of drive letters through Group Policy. I also made a custom template file where you could enter the numeric value directly instead of editing the templates that came with Windows.
I used to host these files directly on my website, but now I have made them available as a download instead. The link to the download is:
http://cid-3e6bae5d8a410b3e.office.live.com/self.aspx/.Public/GroupPolicyHideDrivesPackage.zip
The package contains these files:

When I have the time I plan to update the custom template to the new ADMX/ADML format for Windows Server 2008, but I do not think that will be anytime soon (Tempus fugit).

What are Restricted Groups?

When using the Memberssection like this, all existing members of the Administrators group will be removed for all computers where this policy is applied.

In the second case the Restricted Group is Domain Users, and we specify that it should be a member of Administrators.

Figure 2: Using the Member Of section of restricted Groups

When using the Member Ofsection like this, the existing membership of the Administrators group is preserved and Domain Users is simply added on all computers where this policy is applied.

In either case your policy should be linked to an OU where the computers on which you want the policy applied are located.

The Restricted Groups information, along with every other setting under the Security Settings container in a GPO, is stored in an INF file called GptTmpl.inf. Each GPO with security settings has one GptTmpl.inf file and its path is always:

The section where the Restricted Groups info is stored is called Group Membership.

Notice that all the groups we selected in the interface have been resolved to SIDs and that those SIDs are prepended with an asterisk (*) character. This is important as we will see later.

Group Names and SIDs in Restricted Groups (to resolve, or not to resolve)

The problem with the Restricted Groups interface is that it allows you to either browse for a group name or enter one manually. It is very important to understand what happens in each case. If you browse; the SID of the group you selected will end up in the INF file in the policy. If you enter a name manually; the name ends up in the INF file.

What are well-known SIDs and how to make sure you use them correctly in Restricted Groups?

If you want to use a well-known SID in a Restricted Groups policy you must edit the policy on a machine that has access to that group and use the browse button to select it. As we have seen, browsing for a group guarantees that it is resolved to its actual SID, but to be able to browse for a group we must be on a machine that can see that group. Fortunately this is not a hard requirement to meet. For example, the SIDs of all default groups that exist both on domain member machines and on domain controllers, are the same. The SID of the local Administrators group and the Administrators group in an Active Directory domain is the same (S-1-5-32-544). The problem emerges when you edit the policy on a machine that can’t browse to the group you want. E.g. if you want to control the membership of the Power Users group on Windows workstations and you are editing the policy from a domain controller (which does not have a Power Users group). If you find yourself in this situation and decide to manually enter the name of the group; that policy will only work on machines where the local Security Accounts Manager (SAM) database contains a group with the exact same name you entered.

To work around this you can edit the policy on a machine that can browse to the group you want. Or you can manually edit the GptTmpl.inf file and add the well-known SID of the group you want. Follow the syntax in the examples above and remember the asterisk. You do not have to enter the members or which other groups that group should be a member of. You can do that in the Restricted Groups interface later. Any members you choose to enter can be either SIDs or group or user names (or computer names). They must be comma separated and groups containing spaces do not require brackets (“).

After the well-known SID is present in the policy you can edit it anywhere you like, but note that if that group is not present on the machine you are editing on; only the SID will be displayed. The policy works regardless.

Figure 5: Editing a group that is not resolvable on the local machine (in this case Power Users on a Domain Controller)

So what about entering the SIDs directly into the Restricted Groups interface? That would be nice so we don’t have to edit the GptTmpl.inf file or get another machine to edit the policy on.

Remember that Windows is built so that whenever you want to enter a raw SID it has to be preceded by an asterisk character (*). Trying to enter that in the restricted Groups interface fails.

Figure 6: Trying to enter a raw SID in the Restricted Groups interface

So your only option is editing GptTmpl.inf or editing the policy on a machine where you can browse to the group.

If you already have a nice security template (inf) file ready with the SIDs and membership information you want ready, you can import it directly into a policy. Any settings you have in the template that are already present in the policy will be overwritten.

This feature is very handy if you have groups with large membership lists and do not fancy adding them all manually again. Also, every other setting under the Security Settings container can be stored in security templates (inf), so they can be easily moved between servers and domains. Notice also that the Export policy option is grayed out on all domain based GPOs. It is, however, available when editing a local GPO. You can also use the Security Configuration and Analysis snap-in to create a security policy, export it, and then import it into a domain based GPO.