For some time now I have been trying to make persistent differencing disks work in VirtualBox. The idea is to have one base disk with all the software that all the VMs you want to deploy needs. Typically the OS, all patches up until the time you created the base disk, common apps like Flash etc. You then generalize this disk. In the Windows world this means running the System Preparation Tool (sysprep.exe) to remove all machine specific data from a VM. Now you can use this disk as the starting point for several new VMs and save a lot of disk space. Typically all virtualization software is able to use a differencing disk, or delta disk, for each VM. This disk only stores the changes made to the base disk in a new disk file, without making any changes to the base disk itself.

In VirtualBox the immutable disk type is what you use for the base disk. Once it is generalized you change its type from normal to immutable. Whenever you create a new VM and connect the immutable disk to it; VirtualBox will create a differencing disk with the VMs changes. This is where I have been having problems. In my scenario I want to keep the VM state in the differencing disk file between reboots, but VirtualBox, by default, will reset the differencing disk on every power cycle of the VM if the VM is running with an immutable base disk. According to the documentation you can modify this behaviour with the VBoxManage.exe tool. Here’s how:

This is what I have been doing with my differencing disks. When I later inspected the disk with VBoxManage.exe, it correctly stated that autoreset was indeed off. But whenever the VM power cycled the disk was reset and the autoreset flag was set back to on.

Initially I thought that maybe this was a bug in VirtualBox regarding the VHD disk format, which is what I use for all my VMs, but the same problem exists with VirtualBox’s own virtual disk format VDI. I also read several posts from other people struggelig with this functionality, but their problems were related to the actual use of VBoxManage.exe, were for different host OSs (I use Windows 7/8), or something else. The reason I kept on trying, though, was that some people were actually able to make it work.

An image in multiattach mode can be attached to more than one virtual machine at the same time, even if these machines are running simultaneously. For each virtual machine to which such an image is attached, a differencing image is created. As a result, data that is written to such a virtual disk by one machine is not seen by the other machines to which the image is attached; each machine creates its own write history of the multiattach image.

Technically, a “multiattach” image behaves identically to an “immutable” image except the differencing image is not reset every time the machine starts.

So there it was! The multiattach disk type is the one to use! I changed by base disk from immutable to multiattach and now my VMs keep their differencing disks across power cycles. It seems that even though VBoxManage.exe can change the autoreset type of a differencing disk that is running off an immutable disk; the flag is not honored and is reset on every power cycle. The question now is why you can actually change that flag when it will not be honored? Would be very simple to just inform the user that immutable disks will always reset, and that multiattach should be used if you want to keep the VM state.

Anyway, VirtualBox is a great product, and also free!

Here is the link regarding the disk types in VirtualBox: http://www.virtualbox.org/manual/ch05.html#hdimagewrites

I use Oracle VirtualBox for much of my testing and demos. Yesterday I figured I wanted to connect two machines in a way that enabled the VMs on one talk to the other, while at the same time keeping the traffic isolated. The easiest way I could think of was adding a second NIC in each machine (host) and connecting them with a crossover cable. One of the hosts already had a RealTek Gbps adapter and the adapter I added also used the same chip, and thus the same driver. Windows handled this fine, even though both NICs had the same device name (not connection name). Unfortunately VirtualBox did not. I couldn’t tell the two cards apart. Looking in the config files for VMs configured for bridged networking, I discovered that VirtualBox references physical NICs on the host by name, not GUID etc. So the only way I could think of for fixing this was to rename the second NIC.

Like I said, the connection name was different and easily changed, but the device name required some tweaking. Here’s how I did it:

After this procedure my “new” NIC instantly showed up in VirtualBox and was available for Bridged Networking. I filed a bug at the VirtualBox site so maybe they will fix it. I have no idea of the consequences for making this change yet. It may break Windows networking in some subtle way, but I doubt it. You may also have trouble if you need to upgrade the device driver for the NIC, but again, I doubt it. To make sure you do not run into trouble, save the previous value of the DeviceDesc value so you can change it back later. You could also change the permissions back to what they were before. Consider this my disclaimer.

The Internal network network in Windows Virtual PC (WVP) has a built in DHCP service that provides the clients connected to it with addresses in the 169.254.0.16 to 169.254.10.254 range. If you need to disable this DHCP service this is how you do it:

All Microsoft virtualization software allows you to manipulate virtual hard disk files (VHDs). The standard operations you can perform are listen in the table below. 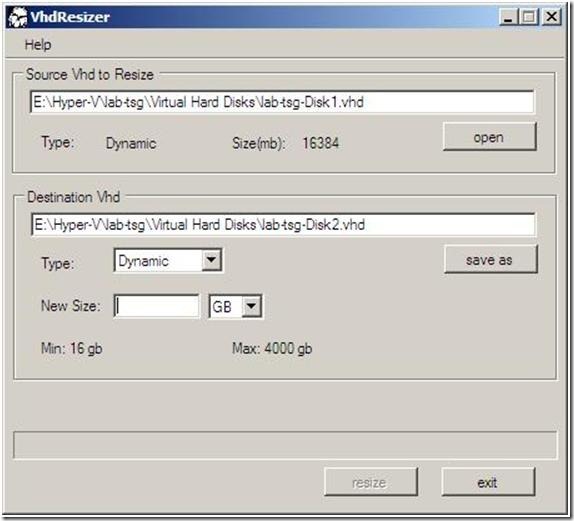 Notice how VHDResizer has determined that the source VHD is a dynamically expanding disk, and that the destination VHD can be set to either fixed or dynamically expanding. This particular source VHD has a maximum size of 16 GB. Because of this the minimum size we can select for the destination VHD is 16 GB, regardless of disk type. The reason we cannot get the disk smaller than 16 GB is that the partitions or volumes in the VHD take up the entire 16 GB of space, even though the actual physical file is much smaller. This is the very basis of a dynamically expanding disk; the guest operating system sees all the space and can address it, but only blocks that have data on them are written to the VHD file. So we need to shrink the volumes inside the VHD to free up space. I find that the easiest way to do this is with Diskpart.exe and the SHRINK command. As long as there is free space at the end of the volume, SHRINK can reduce the size of the volume. You can see how much you can shrink the volume by running SHRINK QUERYMAX. Then you can use SHRINK to shrink the volume by the maximum space available.

But sometimes there is data at the end of the volume or very close to it, making the size you can shrink a volume by very small. To get around this you need to move the files to the beginning of the volume. The best tool I have found to do this is JKDefrag. By using JKDefrag’s action option 5 (Force together) we can force all the files on the volume together at the beginning of the volume. This will cause fragmentation, but we can deal with that by doing a normal defragmentation run when the volume has reached its desired size.

But sometimes even this isn’t enough. However many times you run JKDefrag you will still see data at the end of your volume. Chances are that this is the NTFS Master File Table (MFT) stored in the file $Mft. The MFT also reserves a portion of the volume it calls the MFT Reserved space. This is to guarantee that the MFT has space to grow in, even when the disk is nearly full. The inability to write to or update the MFT would lead to disk corruption and orphaned files, which is the reason for this precaution. But to achieve our goal, we need to move the MFT and the MFT Reserved space blocks from the end of the volume and towards the start of the volume. (The MFT isn’t really at the end of the volume, at least it wasn’t in the beginning. Windows places the MFT around the middle of the volume by default, but since we have shrunk our volume it is now at the end.) The author of JKDefrag says that version 4 of JKDefrag will be able to move and defragment the MFT, but until that version is available we have to use another tool. The best I have found is Raxco PerfectDisk 10. PerfectDisk is commercial software, but you can download a trial version to perform your MFT defragmentation. Remember to get the correct version of PerfectDisk, the Pro version will not install on Windows Server for example. Install PerfectDisk 10 inside your virtual machine and analyze the volume you want to shrink. Select the Boot check-box next to the volume drive letter and reboot the virtual machine. 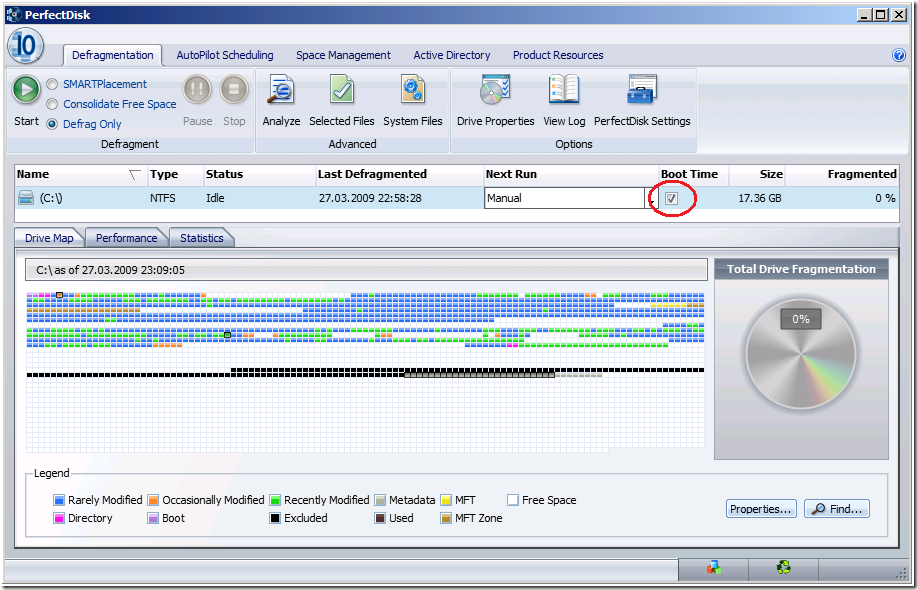 During the boot PerfectDisk will defragment your volume and move the MFT to around the middle of it. You have no control of where PerfectDisk moves the MFT, it uses its own internal logic to determine that. You probably will also see that the MFT will grow, this is also due to PerfectDisk’s internal optimization settings. After the virtual machine has booted you can again use Diskpart.exe and the SHRINK command to further reduce the size of the volume. You can repeat this process until you have reached your desired size for the volume. Then, finally, you can run VHDResizer and shrink your VHD file, and also convert it at the same time.

Here is a short script that will install the prerequisites for System Center Virtual Machine Manager 2008:

Since ServerManagerCMD.exe is deprecated in Windows Server 2008 R2 and has been replaced with PowerShell cmdlets, here is the PowerShell command as well:

Remember to do ImportSystemModules or Import-Module Servermanager first.

No need to do PowerShell since it is already installed on Windows Server 2008 R2.

Also, remember that SCVMM needs the Domain Functional level to be at least 2, that is Windows Server 2003. The Configuration Analyzer will warn you of this:

The GUI insatller (setup.exe) for the Virtual Server 2005 Virtual Machine Additions do not offer a reinstall or repair option. That means that if you ever experience any problems with any of the additions you are forced to first remove the additions, reboot, reinstall them and the reboot again. But if you use the MSI directly with msiexec.exe instead of setup.exe you have some more options. This command will reinstall the additions on your virtual machine:

You need to mount the Additions.iso file and change to the Windows directory in the ISO image.