Windows 10 introduces the ability to join a computer to the cloud directory service Azure AD. This is very similar to the traditional domain join, where you join a computer to an Active Directory domain, run on-premises by one or more Domain Controllers. Both operations lets the computer operate within a common security context and benefit from Single Sign-On (SSO) to all resources that share the same security context. However, joining Azure AD instead of a traditional domain can break things or make them more difficult. There are many examples of this, but the one I want to discuss here is connecting with Remote Desktop (RDP) to an Azure AD joined computer with a user account from Azure AD. Just to be clear; the connection we want to establish is to an Azure AD joined computer, logging on with an account from Azure AD. This account can either be synced from on-premises or be mastered in the cloud, and both federated and password logons are supported. We do not depend on any local accounts on the computer, using tricks such as adding an Azure AD work account to a local account or a Microsoft Account (MSA), this is pure Azure AD.

There are some obvious prerequisites for this to work:

The key to connecting is having Windows 10 present an desktop login screen: 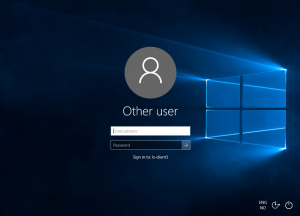 That means that we must disable any form of single sign-on or integrated authentication. This requires the following steps:

The last trick to make this work involves the username you specify on the logon screen. It must be in the following format:

This is a non-intuitive format for those of us who have connected to Windows over RDP in the past, but it is what works. I have not been able to connect with any other combination of domain, username, DNS domain or UPN, but this may very well change soon.

When you are joined to Azure AD we are naturally also authenticating against Azure AD, but it might be that you have federated Azure AD against an ADFS server, in which case authentications are redirected back to on-premises. Depending on your setup for authentication you will see the following differences:

Azure AD authenticated users will display the logged on user as: AzureAD\<concatenated display name>. Federated tenants will display the logged on user as <on-premises NetBIOS domain name>\<on-premises sAMAccountName>. This difference is visible if you use the whoami utility or look at the environment variables. Just to be clear, these differences do not have anything to do with remote desktop connections, they are just a consequence of joining Azure AD.

Connecting with a local account to a Windows 10 computer joined to Azure AD would as it does for any other Windows computer.

This is probably not how Microsoft would like us to connect to Azure AD joined machines so we can expect NLA authenticated connections to work some time in the future.