While out to dinner the other night we got to talking about name resolution in Windows, as one does while out enjoying a fine meal with friends… During the discussion we found that one of us had experienced some strange behavior with regards to the prioritization of DNS servers and failover. Specifically the issue was that the DNS resolver in Windows would not fail over to the next DNS server on the list if the server currently in use became unavailable. This sounded like a major bug and we were amazed that if this was indeed the case; how come we had not heard about it before? Out came the smartphones, the conversation stopped, the food went cold and the beer warm. After quite some time (at this point the waitress had started sending us long gazes, wondering if we were all stricken by some strange debilitating disease) we still had nothing to back up this case. So there was nothing for it: I went back to the hotel to do some testing. This is what I found…

It is important to understand that we are talking about the DNS name resolution behavior here when the machine is acting as a DNS client, not a DNS Server. Windows uses two components to resolve, register and cache DNS names. These are the DNS Client and the DNS Resolver. The DNS Resolver, aka the Windows resolver, is part of the TCP/IP protocol and cannot be disabled without disabling the protocol itself. The DNS Client is implemented as a service with the friendly name DNS Client, and a service name of Dnscache. Its description reads as follows:

The DNS Client service (dnscache) caches Domain Name System (DNS) names and registers the full computer name for this computer. If the service is stopped, DNS names will continue to be resolved. However, the results of DNS name queries will not be cached and the computer’s name will not be registered. If the service is disabled, any services that explicitly depend on it will fail to start.

So the DNS Client is responsible for caching the results from the DNS Resolver, and register the computer’s FQDN in Dynamic DNS. If you stop the DNS Client you can still resolve names, but they will not be cached and a DNS Server will be queried each time a name needs to be resolved to an IP address. Needless to say, this may impact performance.

Each network adapter in a Windows machine that is bound to either the TCP/IPv4 or TCP/IPv6 protocol has a prioritized list of zero or more DNS servers to which queries to resolve names can be sent. The adapters themselves are also prioritized. A name is resolved using this process:

The DNS Resolver queries the DNS servers in the following order:

The case we are exploring here is as follows:

On a Windows machine with one network adapter, which is bound to the TCP/IPv4 protocol, with two or more DNS servers specified in its TCP/IP properties; if the primary DNS server does not respond the machine will not fail over to the secondary DNS server and will be unable to resolve names.

I used this setup to test. 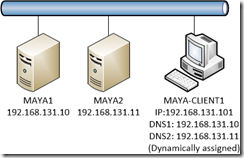 The test I did was very simple. With Network Monitor running on the client I first pinged the name nothere1. In Network Monitor I verified that the response had come from MAYA1 (the configured primary DNS server). I emptied the DNS cache on the client and disconnected MAYA1 from the network. I then pinged nothere1 again, using Network Monitor to see which server answered.

It should come as no surprise that this worked exactly as expected. Under normal conditions Windows will use its configured primary DNS server, if that fails it will use the next configured server on the list after a short delay.

Here is the process in Network Monitor

So far it looks like Windows behaves exactly as you would expect! That is always nice.

To see a demonstration of how the DNS Resolver and the DNS Client work together; try this:

2 thoughts on “Will if fail over, or just fail? Some DNS empirical testing”