Over the years the setup process for the Windows OS has been streamlined and optimized a lot. It used to be that you have to input a lot of information throughout the installation and the actual transferring of the OS files onto the hard drive took a long time. Now, the data copying has become a lot quicker by using things like imaging technology, and the user interaction during setup has been reduced to the bare necessities. So much so in fact, that I personally am now missing a few options that I could previously set. One of those is the computer name or hostname; the name you give your computer. In Windows 10 there is no question during setup what the computer should be called. Instead, Windows Setup automatically generates a name for you that looks something like this: DESKTOP-7KCPLCO. You can of course change this later using e.g. PowerShell’s Rename-Computer cmdlet. The problem is that the original name is often stored in the services you connect to, before you can actually change it. For example, when you join Azure AD during the Windows 10 Out-of-Box-Experience (OOBE), your machine is joined to Azure AD with the name that Windows Setup configured, and even if you change it later, it does not update in Azure AD. This is surely (hopefully) something that Microsoft will fix, so that it works the way it does in local Active Directory, where, if you change the name of a domain joined computer; the name in the directory also changes. But for now, that is not the case, and it can be quite a challenge keeping track of all those DESKTOP-<random number> machines.

Luckily there is a workaround available. (In fact, there might be more than one workaround, but one was enough for me.) The one I made work was using the Windows unattended install support to supply a computer name during the specialize phase of Windows Setup. I basically configured an XML file that told Windows Setup which name to give the computer. Since there is no GUI prompt for this it all happens behind the scenes during your install. Using unattended setup of Windows is usually something that is only cost effective if you are going to install a bunch of machine over a long period of time, and it usually requires a lot of configuring a testing and things like driver packages, reference machines, distribution shares and in-depth knowledge of the Windows DISM utility. But in our case we need none of that, the only thing we want is a file with the name of the computer in it. This is how you set that up…

The file that holds all the information to install Windows 10 in a highly customized, hands-off fashion is called an answer file and is called unattend.xml by default. It is usually generated with the System Image Manager tool, which is part of the Windows Assessment and Deployment Toolkit (ADK). Hundreds of settings can be added to unattend.xml, but right now we only need the one for the name of the computer. This particular value is called ComputerName and is configured during the specialize phase of setup. Here is the entire chunk of XML you need to set the name of your computer using unattend.xml:

You need a removable drive

So how do we get Windows Setup to read our unattend.xml file during setup? When we do large deployments of Windows we usually have several XML files for different variations of installs, and they are specified using the deployment tools used. Luckily for us, we need nothing so complex here. Remember, we are talking about the occasional install of a few machines. Windows Setup is configured to implicitly look for an unattend.xml file in several locations when it starts. (It’s called implicit, because you can also explicitly provide an answer file using a command line parameter.) Windows Setup looks in a lot of places for unattend.xml, and also looks for other XML files to use with other phases of setup, but we don’t need to go into detail about that here. Setup will look for unattend.xml in the root of all RW/RO removable drives on the system, and this is by far the easiest method to achieve what we are trying to do here.

After you have configured your desired name in the piece of XML provided about, save it as unattend.xml, in the root of either the USB drive from which you are installing Windows, in the root of another USB drive, of even on a floppy disk (virtual or physical). As long as it is called unattend.xml, is in the root of the drive and the drive is of type removable, it will be picked up by Windows Setup. Start Windows setup as you normally would and wait until OOBE starts, then configure your computer like you want it. The setup process itself will not change and you will have no indication that the machine has been given another name until you can access the desktop and check for yourself. Once that happens you can use e.g. hostname.exe to see if your change was successful.

Note that since setup looks in several places for unattend.xml, it might find more than one. There is a search order and the answer file with the highest precedent is used. Make sure you know which one will be picked in your scenario and that you make your changes in that file.

BTW: I hope someone out there picked up on my attempt at Shakespeare-pun in the title of this post:

“A rose by any other name would smell as sweet”

-Juliet in Act II, Scene II of Rome and Juliet

Ever since the Windows Subsystem for Linux/Bash on Ubuntu on Windows feature in Windows 10 I have been playing around with it. Canonical, the makers of the Ubuntu Linux distribution, and Microsoft, made the Windows Subsystem for Linux (WSL) together, and it enables bash, which is the de facto default CLI shell on Linux, to run on Windows as a first class citizen. You no longer need things like Cygwin to run  bash and its command language and tools on your Windows 10 computer.Recently I did a little customizing to get a more genuine Ubuntu feeling on my Windows box. Specifically I wanted to make my Windows-based bash window look as much as the real thing as possible.

Windows has its own fonts for console windows, like Command Prompt (Consolas) and PowerShell (Lucida Console). But Ubuntu uses the Ubuntu Mono font for its console windows. Luckily for us the Ubuntu Font Family, of which Ubuntu Mono is a member, is freely available to anyone, in easy to install TTF format. To use it for your bash windows, download the package from the Ubuntu font site, extract its content and right-click each font file (.ttf) you want to install.

Now, open your bash shell and edit its properties. In the Font list, select the newly installed Ubuntu Mono font: 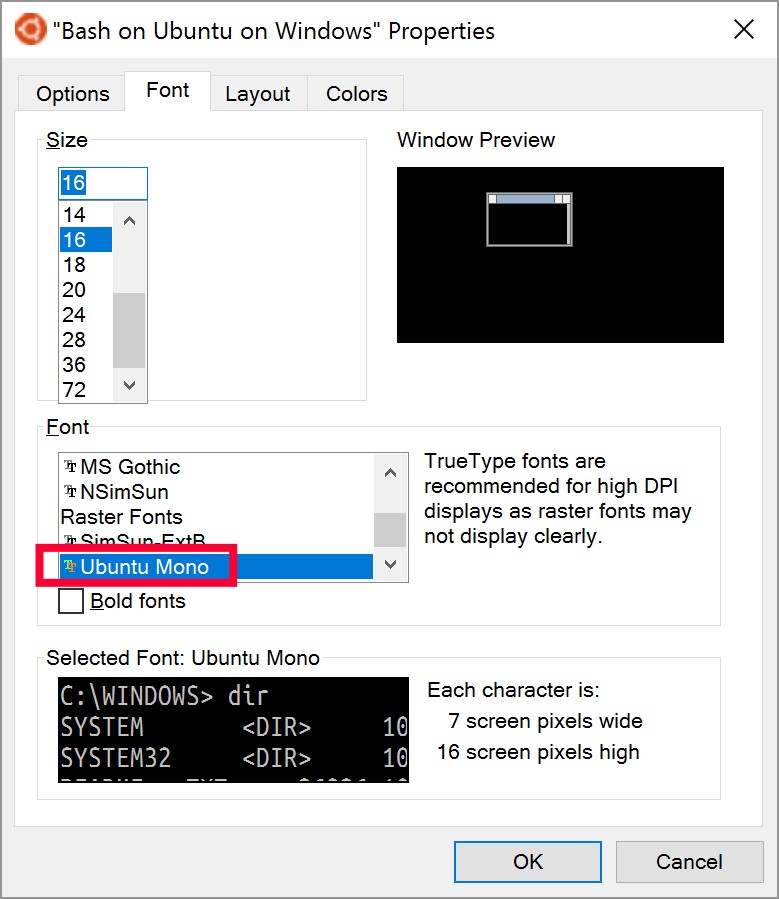 Granted, it’s not a huge difference between the default font and Ubuntu Mono, but the devil is in the details 🙂